Blog
MAE The Movement for African Emancipation (MAE) / Uncategorized / THE SPECTRE OF PAN AFRICANISM: THE ROLE OF THE STUDENTS MOVEMENT
Mar 19 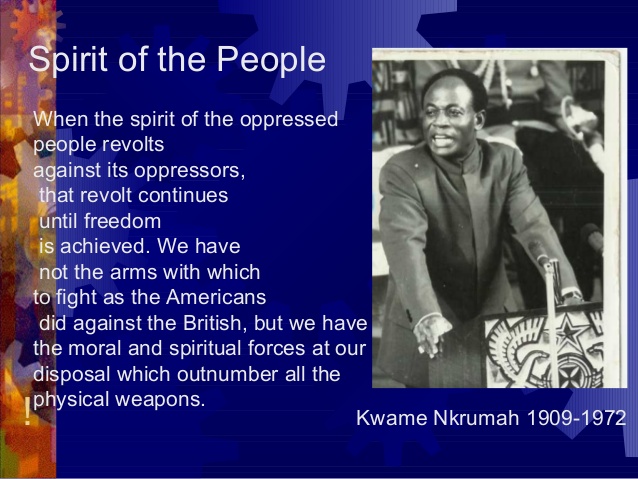 THE SPECTRE OF PAN AFRICANISM: THE ROLE OF THE STUDENTS MOVEMENT

Being text of a speech given on 28th February to Movement of Pan African Students (MOPAS), University of Lagos

When I see the word spectre, I remember it’s a word I first saw in the Communist Manifesto, which I had to then look up in a dictionary as I had no idea what it meant. It was used in this sentence:

“A spectre is haunting Europe – the spectre of communism.” And the Manifesto goes on to say: “Communism is already acknowledged by all European powers to be itself a power.”

A spectre is a ghost, a spirit, a fearful thing.

I will contend that Pan Africanism has been such in the past but it is not so today. It is the role of the students movement to join the masses of this country to awaken this fearful spirit.

The Communist Manifesto was published in order to make clear what this ‘spectre’ was – as it was being misunderstood to be everything you fear but not being understood for what it really was. Every opposition to the European powers was essentially called communist, much as any opposition to the USA orthodoxy is always called communist or socialist.  Are we clear as to what Pan Africanism is?  I think the meaning and essence of Pan Africanism has become lost in time, and this has gone along with its no longer being a force for power on this our continent and in our country.

What, then, is Pan Africanism and what is it NOT?

Pan Africanism can be nothing other than a movement for the emancipation of the peoples of African descent from foreign bondage.  Pan Africanism arose during a time in which African peoples were THIRD class citizens in Western countries and colonial subjects of European Empires. Imperialism essentially led to the need for Pan Africanism to be born.  Through understanding that Africans suffer from a common condition of being an enslaved and colonised people, Pan Africanism calls for Africans to have pride in their own great histories, to develop independent forms of government, and to rely on traditional, positive African values as the foundation of their societies.

Pan Africanism is about POWER. It is not just about being awakened to have pride in your history or to adopt your culture.  The earliest practical Pan Africans, the ones who put Pan Africanism to practice, understood this. Nkrumah, Sankara, Cabral, Sekou Toure led movements to remove colonialism from their countries in Africa and sought to establish Pan Africanism across Africa.  They did not leave Pan Africanism to just be something talked about in small rooms and little circles. They got involved in their communities, they related the ideology to the practical needs of the people, they tried to let people see how their suffering could end if they adopted Pan Africanism.  For doing this, they were destroyed by enemies within under the direction of enemies outside.

Pan Africanism is not just about CULTURE. This is a common misunderstanding about it. If I dress AFRICAN, or if I speak AFRICAN. That is part of it, but to take the cultural part and leave out the economic part is not to be Pan African. On those grounds, Obasanjo would be a Pan Africanist.

When we say Pan Africanism calls on Africans to rely on positive, traditional, values, that does not mean Africans must adopt any and every culture, whether or not it fits into today’s circumstances. Cultures arise and evolve over time, taking on particular characteristics as society evolves. But there are abiding values that we see when we look at Africans’ indigenous history.  Africans have traditionally embraced collectivism, the idea expressed in Ubuntu (“I am because you are”). This is in stark difference to the philosophy of individualism embraced by Europe especially after capitalism took strong root there.  Africans embraced a close relationship with nature, where humans do not exploit nature mercilessly.  Now the Western world is concerned about things like climate change and global warming, which is the result of a reckless exploitation of nature.   We developed herbal medicines based on the use of natural products that are effective and also more suitable to human bodies, without the sort of side effects you get with modern medicines.  These are abiding values, but they will develop modern characteristics suitable for the times we live in. So, if we’re living in a time in which people look for medicines that are quick to administer and easy to ingest, we don’t say you must take agbo, we say that the best kind of society will develop on the traditional medicines to give modern formats for delivery.  That is what our governments have failed to do over time – building the best possible education and research to take the best of African and apply it to a modern setting. There are numerous other examples – the types of houses we live in, the way we farm.

What Pan Africanism calls for is African solutions to African problems. The solutions we try to apply to societal problems must be relevant to our context. As Fela Anikulapo Kuti sang, I must see where copy copy go carry us reach. As of now, it has carried us nowhere, and it never will.

And now to the role of the students in the Pan Africanist movement that must be built if we are truly to be free from the mis-rulers destroying our people and our lands under the guidance of imperialism.

First of all, as students you have a major role to ensure that we properly tell our own histories, develop our medicines, build our own technologies. Our mis-leaders have ensured that we have no history to tell.  Chinua Achebe said, “There is that great proverb – that until the lions have their own historians, the history of the hunt will always glorify the hunter.” No wonder, therefore, that ONLY in 1963, a European historian said, “Perhaps in the future, there will be some African history to teach. But, at present there is none: there is only the history of the Europeans in Africa. The rest is Darkness….” And then our leaders decided to believe such advices and wrote into our school textbooks that Mungo Park discovered River Niger. Where, if we had bothered to study Mungo Park properly, we would have seen the truth. Europeans did not even think that Mungo Park discovered River Niger, the idea was that he aimed to discover the SOURCE of the river Niger. But what they failed to tell you was that during his attempt, where he needed Africans to show him the way, he was killed on the river Niger by Africans.  If the truth came out that he was killed by Africans, what does that say about the fact that Africans have and will resist foreign invaders?

Europeans’ influence on our telling of history runs very deep. Now, take what we call culture. It is common for people to say, it is African culture to subjugate women, for example.  This idea is very much due to Europeans and very far from the truth. Not that women subjugation was not a reality in Africa. In African Myths and Legends of Gender, Prof. Sophie Oluwole explains the difference between Africans and Europeans on gender. Where it is written and practiced in European culture that women must stay at home, do not work, are an inferior gender, etc, in Yoruba traditions, women are given much more significant roles – e.g. in creation mythology.  Prof. Oluwole explains that women were indeed not given equal treatment, but the case of the Yorubas was certainly more progressive than that of the Europeans.

And when we speak of culture, our understanding of it has been distorted by European influence. For example, Europeans were responsible for spreading the idea of igbo culture being very anti-women, e.g. in inheritance etc. We must be careful to separate indigenous culture and traditional culture, wherein the traditional is quite influenced by colonialism even though it has lasted a long time. In-depth research led by Africans would have seen, as many have discovered since, that a lot of the so called customs in Igboland derived from colonialism, as colonialism emphasised relationships with men, and empowered men versus women. Interestingly enough, when there were revolts against colonial rule, there were many instances of them being led by women, e.g. the Aba Womens’ Revolt.

So, as Pan Africanist students, you must change the narrative in the tellings of our own stories.

The most severe impact of imperialism is the indoctrination of the peoples of our continent.  Which is why through history, they tell us HIS STORY – the story of the European man. Your role as students is to change this narrative, to fight this indoctrination by all means at your disposal. You must become leaders and teachers.

But the most effective way to do this is to belong to a movement aiming for a radical change in the system through which we are led.  Colonial mentality does not disappear in days, or even in years – and there are only so many people you can teach.   You need POWER to begin to reverse colonial mentality, but to do this you must have leaders and teachers free from this mentality.

Nigeria once had a radical students movement, but never one led so strongly by Pan Africanists.  Even our independence movement was so far away in thought and deeds from the levels of Pan Africanism reached in other countries of Africa. We must change this narrative too.  Pan Africanism is the solution to the problems of our country and our continent. We must turn it into a fearful spirit.

Our own Movement for African Emancipation offers a vehicle through which we must organize for the emancipation of the peoples of our land. We understand the need to build leaders who are conscious about their own great history and who realize that the greatest weapon in the hands of the oppressor is, as Steve Biko, said, ‘the Mind of the Oppressed’. This is the greatest role of you as Pan Africanist students. To be a weapon that will Liberate the mind of the oppressed.